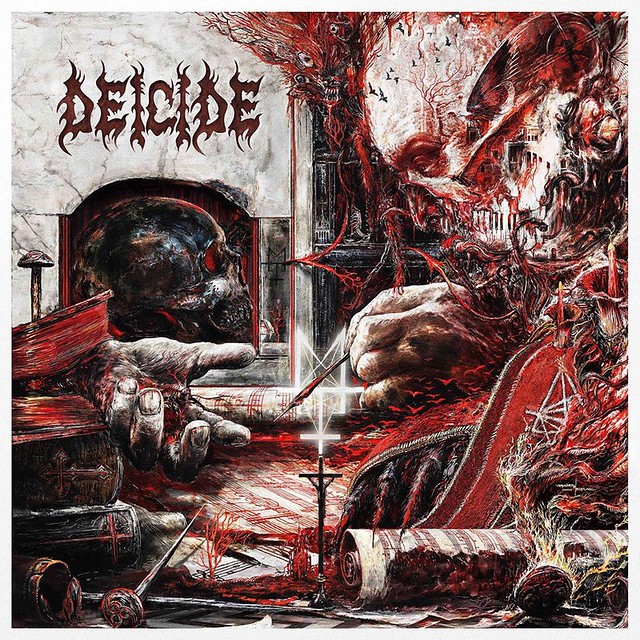 主唱 Glen Benton 表示：“這張專輯隨著時間的推移匯集在一起，意味著我們不想急於求成。”
“這張專輯真正開始成形，完整的，緊湊和有力。隨著樂團的推進，寫作過程和其他一些過程也使得唱片和樂團更加强大。 “Overtures Of Blasphemy 褻瀆神明的序曲”，也許是該樂團迄今為止最强的力作。
“Excommunicated”, a brand new song from Florida death metal veterans DEICIDE, has been released via Spotify and can be streamed below. The track is taken from the band’s long-awaited new album, “Overtures Of Blasphemy”, which will be released on September 14 via Century Media. The follow-up to 2013’s “In The Minds Of Evil” was produced by Jason Suecof (THE BLACK DAHLIA MURDER, TRIVIUM) at AudioHammer Studios in Sanford, Florida. The cover artwork was created by Zbigniew M. Bielak (GHOST, PARADISE LOST, MAYHEM) and can be seen below.
“Overtures Of Blasphemy” track listing:
01. One With Satan (3:48)
02. Crawled From The Shadows (3:20)
03. Seal The Tomb Below (2:57)
04. Compliments Of Christ (2:44)
05. All That Is Evil (3:24)
06. Excommunicated (2:55)
07. Anointed In Blood (3:18)
08. Crucified Soul Of Salvation (3:00)
09. Defying The Sacred (3:30)
10. Consumed By Hatred (3:02)
11. Flesh, Power, Dominion (3:33)
12. Destined To Blasphemy (2:25)
DEICIDE frontman Glen Benton states: “This album came together over time, meaning we didn’t want to rush it.
“A few people might remember an interview where Steve Asheim (original member, drummer/songwriter) said ‘the material is done, but it’s just not there yet.’ Well, that was the jumping off point of when this album truly started taking shape and the songs became what they are now…complete, compact and effective. As the band pushed forward, so did the writing process and a few other processes which made the record and the band stronger. The result is ‘Overtures Of Blasphemy’, perhaps the group’s strongest release to date.
來源：NOWED Records